Legends say that the tower of the wizard Aztazel rose to the heavens, calling to our sky the stars, who gathered around the tallest spire to observe zir most masterful work. Year after year, Aztazel worked tirelessly to plumb the deepest depths of the arcane, and as ze learned, the tower climbed higher. Around the tower were four tapestries, cascading over the shining brickwork. These told a story of magic and wonder, of Aztazel’s journey to becoming a great wizard. Locals said that they were woven from the impressive beard and dark flowing hair of Aztazel zemself. But as the tower grew, the story in the tapestries became dark: full of mysteries, then secrets, then paranoia and fear. Aztazel was afraid, for ze had learned that the source of zir magic stemmed not from zir abilities or innate talent or years of study, but from the stone of the tower itself. The next few years saw Aztazel not only withdrawing further into the tower, but also mining the supply of this stone, called saphirene, until it was depleted. Aztazel had a stranglehold on magic, sharing none of it’s wisdom or power with anyone, causing the fields and orchards, rivers and lakes, storehouses and cellars to dwindle. A sort of tyranny came over the land – a tyranny of Aztazel’s callous disregard for anything but zir tower. Until one day...

That fucker was GONE! The tapestries? Poof, dissolved into thin air! The intricate brick work? Boom, shattered, flinging debris all the way to the fucking sea! Now that the asshole Aztazel has vanished, the magic rocks are up for grabs! It’s a free-for-all now. You ever wanted to learn magic? Either cause you’re a big old nerd, a power hungry social climber, or you just wanna make magic sexy again? Now’s your chance, but you’re not the only one on the hunt.

Wizard Tower Rumble is a roll and stack dice game, with different game modes for solo, co-op, and competitive play. To play, you will need an assortment of physical dice - the more the better, though most modes can be played with whatever you have on hand.

If you would like a copy of Wizard Tower Rumble but can't afford the purchase price, you can email us at tabletophotdish@gmail.com to request a free copy!

In order to download this game you must purchase it at or above the minimum price of $10 USD. You will get access to the following files:

Support this game at or above a special price point to receive something exclusive.

Community Copies are available for anyone unable to purchase the game at full price. I hope you enjoy the game and would greatly appreciate a rating or review once you have read or played the game, especially since it's in development! 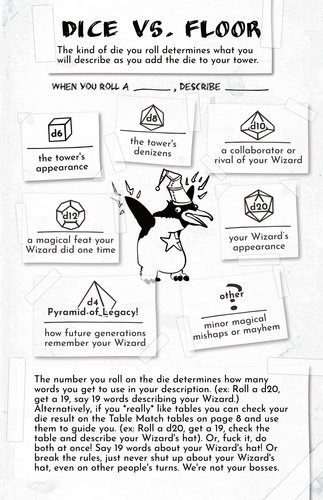